MEPA together with the Mgarr Local Council organized an activity yesterday to raise awareness amongst young children attending the Mgarr Summer School, about the importance of conserving the
loggerhead turtle and the bottlenose dolphin.

The children attending this event were briefed about the importance of these species in our sea and were given details about the project and the conservation work being done in this EU Life Project. The children were very interested to hear about the importance of these flag ship species and were fascinated when they heard about the frequent presence of such animals, including whales in the Maltese waters. The children will also be participating in a competition wherein they will be presenting
a drawing of these animals. Promotional items, done as part of the EU LIFE MIGRATE project were also given to the children, their teachers and the local council, as a token of participation in this activity.

The LIFE MIGRATE Project, which is 50 % financed by the EU commission and for which BOV is the co-financier, is being coordinated by MEPA with KAI Marine Services Ltd., (a Spanish organization) and the Ministry of Sustainable Development, Environment and Climate Change as associate beneficiaries, aims
to carry out studies to determine the status of the population of the above mentioned species in Maltese waters. These species (amongst others) are protected by the EU legislation as well as
numerous other multilateral agreements to which Malta is a party.

Through this project we are also seeking to increase the awareness of conserving these species amongst the general public, including young children. Sea-users and other stakeholders are already being involved as volunteers in this project; however, it is also crucial to draw attention to the younger generation. The affect of knowledge at such an early stage will stem out into many directions even by reaching out to older generations easily reached through these children themselves.

The Mgarr Local Council has always supported projects aimed at promoting environment issues. It is the Council’s firm belief that the best way to promote this is through the younger generations so as to invest in a more educated and sensible generation in the future. For this reason, the Mgarr Local Council has teamed up with the Club 3 to 16 in Mgarr, under the coordination of Ms Maria Cipriott to promote the values and ideals of the LIFE MIGRATE project with the children attending this club. The Council is sure that this activity will not only prove to be fun for the children but will instill a greater
sense of civic pride in the participants. 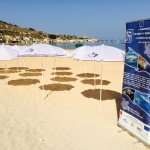